While my ride from Tonapah to Lida Junction was eye-opening, fantastic, and successful I was a little disappointed I hadn’t ridden all the way to Beatty and back. I definitely underestimated the weather, forgot to bring the supplies to keep my electronics charged, on that note I was over reliant on electronic navigation, so mistakes were made and learned from. My outings are always bracketed by firm commitments at home so I couldn’t plan on taking another day. Not a problem! The next week I returned to the airstrip at Lida Junction to continue my trip south.

I planned a route into the Tokop Mining District then along the east side of the Amargosa Range into Death Valley NP and onto Rhyolite and Beatty before looping back. The goals remain the same, to follow historic railroad grades or alternate roads to establish a north-south Nevada route. Maybe I should have paid more attention to the elevation profile of the plan, ha! Luckily climbing never upsets me.

As an experiment I changed my wheelset on the Surly Ice Cream Truck from the 26×4 to 29×3. I instantly felt the bike was more lively, lighter feeling. At the end of the airstrip the road crossed a soft sandy section of playa. The tires bogged down a bit but I kept rolling without having to air down or hike-a-bike. For most adventure touring conditions I think a low profile “plus” wheelset is ideal.

I didn’t do excessive research into the route through the Tokop mining district. I chose a route that kept me out of sight and sound from the traffic on US 95. I left my discoveries up to serendipity. Riding the shoulder of Slate Ridge I was entertained by the geology I have come to expect in a mining district; exposed craggy formations of brightly colored rock. It is still a novelty to be touring in the Land of Burros and Joshua Trees. It appeared the Joshua trees had already bloomed. Even though my route was pre-planned and downloaded into my Garmin there were opportunities to get off course. If you have the flexibility in schedule along with food/water provisions these opportunities should be explored.

My favorite section was climbing to the radio towers at Tokop. I was above a canyon section called Hell’s Gate and the route through the canyon looked awesome! The route shows up on Google Maps as Cat Trail. The route looked well suited to fatter tires and a little slower going. The road I was on was steep but in good condition. Even with the headwind I was pleased with my progress. Past Hell’s Gate was a fun descent to Oriental Mine.

A major tourist attraction in this area is the Hard Luck Mine Castle. I rode past deciding not to take pictures as the sun was dipping directly behind the castle. But even the road through Hard Luck was entertaining. Stubborn boulders in the roadway were painted red. Funny hand painted signs entertained me as I passed. I stopped at a small art installation to take some pictures, I couldn’t resist.

I skirted the Bonnie Claire Flat to Bonnie Claire Road along the Grapevine Mountains, the north end of the Amargosa Range. I made the switch to the old railroad grade where the road dipped down to Sarcobatus Flat. My impression was the playa was slowly reclaiming the raised railroad grade. Much of the grade was covered in soft pillowy salt deposits. Travel was slow and as the novelty wore off I was wishing I was back on the road. The sun was dipping behind the mountains so I made camp at the end of a very rewarding day.

The plan for day two was to follow the roads and railroad grades into Death Valley NP, visit Rhyolite and Beatty then start to loop back on alternate routes when available. The wind was a little less intense than day one but adverse conditions were still a concern. The wind had been coming out of the the south so I was looking forward to a well deserved tailwind on the return. (There is no “deserve” in touring)

The road I was on was rough, since it is outside the NP it sees much more traffic. Conditions improved considerably  once I was in the park. Everything appeared much less disturbed. Once I passed through a saddle in the Bullfrog Hills I could see the Amargosa Desert and the Funeral Mountains of the Amargosa Range. My next stop was the entrance to Rhyolite, a popular stop for tourists on their way to Death Valley NP. I decide to explore it on my return. I followed the highway into Beatty to the Death Valley Nut and Candy emporium, as well as Jedidiah’s Jerky and Gourmet Snacks. I fueled up on trail mix, jerky, and drinks. I was tempted by the homemade ice cream but if I kept it up I may not get back on the road.

My route in and out of Beatty was on NV 374, but near its summit there was an old grade that wound its way into Rhyolite. I took that route on my return. Rhyolite has some great historic buildings to check out, as well as the Goldwell Open Air Museum on the way out of the park. I wish I felt I had more time to spend but I wanted to get as close to Bonnie Claire to camp. I followed the railroad grade as closely as I could through the Bullfrog Hills to the edge of the National Park. The grade is a highly recommended route. It has been used by jeeps and as a result they have created “go-arounds” in cases where the bridges are out or the grades are washed out. In a couple of places where the grades are carved out of a hillside boulders have rolled onto the grade, there are go-arounds but bikes can pass. The engineering feat, planning and building of these railroads is awesome to me.

The wind had started to die down and I felt cheated out of my tailwind. It was still stormy all around me. Then the wind reversed, I had a headwind again, and the skies ahead of me were dark and ominous. My plan was to keep riding for a couple more hours. But I quickly decided I better find a place to camp sooner rather than later. The density of shrubs and rocks made finding a footprint for the tarp tent a little challenging. My first attempt to pitch the tent ended in me holding the flapping tarp in one hand as the stakes were whipped out of the ground by the wind. My solution was to put the largest rocks I could find over the buried stakes and line the windward side of the tent with rocks. This worked, just in time for the snow to blow in.

My night was comfortable. But I wasn’t sure what I would be waking up to, so I planned an early start. With fresh snow, were my three inch wide tires going to give me enough flotation? Would 4 or 5 inch tires be necessary?

Fortunately the couple inches of wind blown snow were fine and the wind was calm. If anything it seemed the road was a bit smoother.

At Bonnie Claire I divided my route between the frozen Scotty’s Junction Rd and the water diversion berms along the road until I connected with the railroad grade. The railroad connected Beatty/Rhyolite to Goldfield via the Sarcobatus Flat playa to Stonewall Pass. I rode the snow covered grade until it disappeared from my detection completely. From there I made my way to a jeep road that put me onto US 95. While I could see the old railroad grade I decided to follow the highway shoulder back to Lida Junction.

I passed a group of RV travelers close to where I was parked. I think my frozen bike and balaclava were a bit of a spectacle based on their response.

What I rode, what I wore, what I carried

I rode the Surly Ice Cream Truck with a 29 plus wheelset shod with Vittoria Bomboloni (front) and Cannoli (rear) tires. I highly recommend the “plus” size format for adventure touring and Vittoria has plus tires for 27.5 and 29. I replaced the stock “comfort” saddle with a Fizik Arione and was very happy. Otherwise I used the same bag/cage set-up as my previous tour. 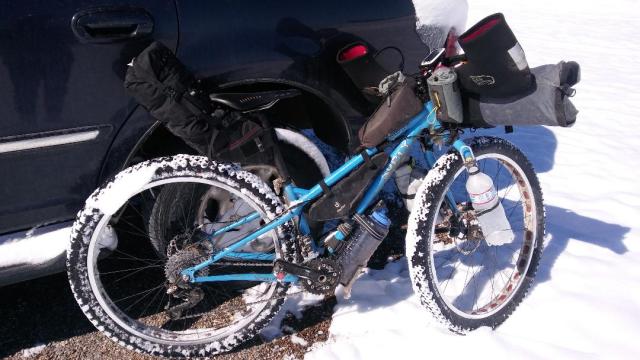 I wore Bellweather Windfront tights, a Louis Garneau base layer, a Smartwool  wind stopper baselayer, and Patagonia Hoodini. My hands were protected by light weight gloves and Bar Mitts. I used old Pear Izumi neoprene shoecovers that are awesome but seem to be discontinued.

My menu did not change substantially. I brought packages of corn tortilla quesadillas for dinners. They match the diameter of the fork stuff sack. I added beef jerky to my trail mix bike snacks and resupplied at Death Valley Nut and Candy emporium.

I would be hard pressed to recommend one route over the other between Lida Junction and Bonnie Claire. The route through Slate Ridge, Tokop and Hard Luck mining areas was fantastic. The ride along the historic railroad grades was equally an adventure. I will have to return to try a “strict” railroad grade attempt.

From Bonnie Claire to Beatty I recommend the railroad grades over the adjacent roads. There are some sections of “phantom” grades and grades that are being reclaimed by the playa that require using the adjacent roads but otherwise the grades are inspirational.

I feel like the railroad grades from Tonapah to Beatty make a good bikepacking route. 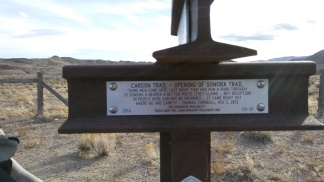