Most of what I write about are short half day outings. These are exploratory routes that I imagine can be linked together or expanded upon to suite anyone’s needs. I plan them  in particular areas but occasionally stumble across “lines on the map.” These write-up get filed under “Ride Reports.” To me these are the most basic bike tour. The next level of outing is the day trip. The planning and organization is somewhere between a half day trip and an overnighter. Day trips tend to be solo as it can be hard to convince a riding partner to commit to a full-day-plus in the car and on the bike.

The canyons off the Sweetwater Rd, NV 338, have intrigued me after using this highway as an alternative to US 395, between Topaz Lake and Bridgeport, CA.  I have camped and fished along Desert Creek in the Wellington Hills on the west side of the highway. Now I know I must link these two areas in a bigger trip.

I picked Nye Canyon “off the map” as it was a prominent line on the map that seemed to branch into many options to explore. My choices are often just this haphazard. The drive was about 90 miles south of Reno so I left early enough to arrive at the canyon as the day was breaking. The conditions were great. I appreciated the signage both in the names of the canyons and the forest service road carsonites. I picked a route that went through an impressive pine grove. I must be in the right place. I climbed into the snow bellow Bald Mountain. I was close to the wilderness boundary and the end of the road when I turned around because of the deep soft snow. I could look into the Pine Grove Flat valley to the east, it looked warm and inviting. The jagged peaks of the Sweetwater Range were enchanting.

I back tracked to the main trail fork. I climbed Dead Ox Canyon. It was sandy but passable with wider than average tires. As I was climbing the dry and sandy road I turned a corner to find the road a sheet of ice. The water of Dead Ox Spring had frozen solid across the trail at this one cold spot on the mountain.

At the saddle bellow Pine Grove Summit I was faced with crossroads. Again by chance and picking a prominently marked route I descended into the ghost town of Rockland.  Rockland Canyon dropped precipitously to the valley bellow. I had some reservations in that I did look forward to climbing back up the canyon if this proved to be the best route back to my vehicle. These doubts are common when exploring a new area.

Once in Pine Grove Flat I felt overcome with “explorers fever”. Like the mountaineers desire to reach the summit at all cost, I started looking around the Cambridge Hills roads knowing they were separating me from the Walker River and beyond. But I have to reel in my ambitions to plan my crossing the Pine Grove Hills to get back to my vehicle. I started my loop to the north but found myself questioning if I had the return climb left in my legs. In all reality I did. But I decided to stay low and loop around the hills following the most prominent roads.

I passed the road that climbs to the ghost town of Pine Grove. But I was intimidated by the steep mountain walls. I worked my way to the north and was pleased to see signage with mileage to Scotts and Mickey Canyons. These are areas to explore on a future trip. I was a little disappointed  assuming I would have to finish my ride on the highway. I climbed one road hoping it might connect me to a network of roads through the hills but it petered out to a game trail I was unable to follow. But eventually I was able to turn onto Hudson-Aurora Rd. which brought me most of the way back to the car on dirt.

I finished at twilight and and felt very accomplished by the day’s journey. I looked at what I carried with me and thought I need to cut it by 1/2. I wore a typical cycling kit plus knee warmers. I carried and wore when necessary a windshirt (Sherpa Shirt by Marmot), a waterproof shell (Alterra Jacket by Belwether), a windbreaker (Hoodini by Patagonia), a wind vest, appropriate head gear and several pair of gloves by varying weights. I have a fairly comprehensive first aid kit, bike repair kit, as well as 4.5 L of water.  I really need to optimize what I carry.

One thought on “Day Trip; Through the Pine Grove Hills” 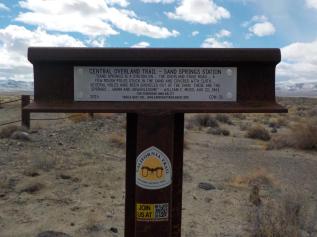 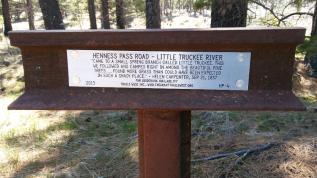 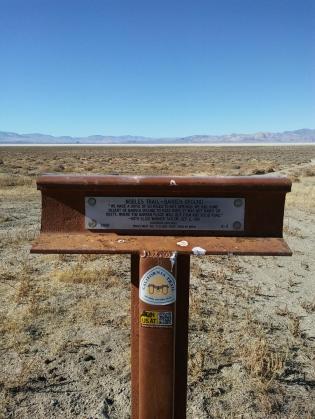 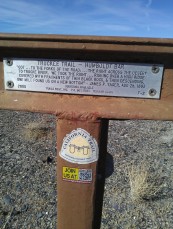 On Monday @lennart_fiederling and I did a loop at #blackrockdesert, north on the playa along the west shore to Mormon Dan Pk, then took the cherry-stem roads into the Calico Hills Wilderness off Soldier Meadows Rd. We returned via Cassidy Mine, then back onto the playa to 12 Mile Access. It is a 44 mile loop and would make a great overnight. Lennart's first and lasting impression was the solitude of the desert.
From my last rides. Flowers remind me of my friends @wheelinfeelin, @ourladyofsardines, and Carrie Jensen who speak for pollination ecology. Our desert bloom may be short a short season. Many plants are just budding now. I hope you get out to enjoy them.
I rode the Tahoe-Pyramid Trail from Hirschdale to Verdi today w @staceywittek, executive director of @blackrockdesert. We chatted about the future of #bikepacking around the Black Rock Desert, other non-motorized recreation, and citizen science projects in and around the NCA. We lunched at Eastside Deli and Maket, a first for me and I do recommend. I hope you can join me for bike trips out of the Reno area. We have so much to offer!
I organized a bikepacking overnight (S24O) to the Lagomarsino Petroglyphs. We had 6 participants, 3 day trippers, 2 long haulers, and my dog Lily decided she and I would cut it short. Check out the photos at @manzanitacycles and @shaydaylami for more story. Lily and I had a blast! Next trip March 20 to Pah Rah Petroglyphs. #bikepackingnv #explorenevada #burritopacking #dogslife
On this weekend's overnight I camped near these ruins below Washington Hill. The maps don't have much info other than there is a grave nearby (@bikekill775 ). I asked myself how would @caarnij shoot this? I have a lot to learn.
Got vaccinated today. It is an impressive operation at the Livestock Events Center in Reno. Ray Hill caught me hanging out in the waiting lot chatting on the phone with my dad.