My first experience on Soldier Meadows Rd was our Reno Bike Project staff retreat in 2015. We drove out in the dark, set up camp, but woke up in a surreal landscape. Ever since that trip I have been tracing Soldier Meadows Rd in satellite view on my computer wanting to get back there. But I must say the images I had in my head based on what I saw on the computer screen had me less than enthused to spend hours grinding out that road. But it is such a significant route in the area I had to go!

Raymond Eliot and I made the drive through Gerlach and north on SR 34 to the Soldier Meadows turn-off. When the pavement ends the adventure begins. Raymond and I have many adventures chronicled here, the biggest being our trip along Smoke Creek Desert. Choosing a riding partner has as much to do with compatibility on the ride as with the 4+ hours in the car and deciding which bar to stop at after the ride (although on this trip Bruno’s Country Club was the only choice).

Rolling out was far more eye-opening than I had imagined. We were above Hualapai Flat and Fly Ranch as well as a wet Black Rock Desert. Ahead of us were the Calico Hills behind us the Granite Range. The road was in excellent condition. Although we were on mountain bikes, gravel bikes would have been great. The vastness of the landscape is apparent as distant features advance very slowly. It was great recognizing familiar features across the playa such as the Selenite Range, Old Razorback Mountain, and Black Rock Point.

We turned off the road to climb up to Jackass Flats. This was our turn-around distance for the day. Twenty-five miles in, 25 miles out, reasonable days journey. There were so many side options to explore. While we were on the edge of wilderness defined as roadless tracts there were the occasional roads that brought you into the wilderness and then at that point you could explore on foot. There were options to cross the playa to Black Rock Point and now that is on the “must-do” list. I will get back here to loop the Calico Mtns Wilderness at some point.

On our drive back we stopped in at our familiar watering hole, Bruno’s Country Club. After Bruno’s passing the bar had been remodeled. I am not a big fan of change but the Picon Punch was just as refreshing.

2 thoughts on “Ride Report; Along the Calico Mtns Wilderness” 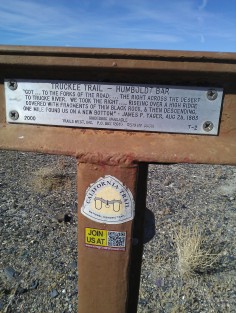 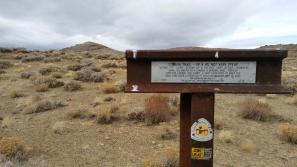 I just got my film back from the West Northumberland Canyon bikepacking trip in the Toquima Range. So pleased how these turned out. #120film #holga #explorenevada #bikepacking #ridewithfriends
Nine of us went on the Black Rock Desert Hot Springs Loop Overnight. Saturday's conditions were ideal as we traveled across the playa to Black Rock Point then north to Soldier Meadows. Sunday's conditions were a bit more variable as a storm system moved into the area. This was our longest trip to date, 105 miles. But I couldn't have picked a better group. #blackrockdesert #ridewithfriends #meriwethercycles #falconercycles #bikepackingnv #explorenevada
#bikeyourpark was a success! @adventurecycling promotes two member-led rides a year. I really enjoy these rides. This year Washoe Lake Rim Ramble took us up Jumbo Grade across Ophir Grade then we descended Dead Man's Creek Trail to Washoe Lake State Park ( @washoelakestatepark ). It was a real adventure ride. Huge thanks to @shaydaylami , @alkcomics , and @manzanitacycles for joining me on this day trip. #explorenevada #dfmi #bikepackingnv #ridewithfriends
Unbelievable news! My @manzanitacycles was recovered by @boyscout_dropout ! The power of good people wins again. I am excited to have new bags from @nukesunrise . More adventure gravel rides to come #bikepackingnv #gravelbike #bikepackingbags #steelissophisticated
We did battle with Nevada's wind and sand in the Big Smokey Valley east of the Toiyabe Range. We celebrated to ride another day in the shelter of Northumberland Canyon in the Toquima Range. It was a glorious night that gave way to a glorious morning's ride out. My head was on a swivel coming up with my next rides in the area. The number one reflection I got was, "what a great group of people!" #bikepackingnv #explorenevada #ridewithfriends #bikepackingbags #desert
Today I rode the California Emigrant Trail-:40 mile desert, Carson River Route from Humboldt Bar to Ragtown (Fallon). Pete Rissler had scouted this route by jeep, then rode it on his Salsa Mukluk before he took me out. It is a route for your imagination! This is just one of many routes settlers took to cross Nevada during the gold rush. #explorenevada #californiatrail #fatbike #bikepackingnv #nevadadesert